Another Spring day ! sun and warm, no wind, the winter-time log booms were removed, and, we are headed for summer.

Having some real nightmare fun trying to master the new (2018) software for creating audio podcasts or radio programming, way too high a technology level increase from ten or so years ago, and unexpected.

Part of the fun is reconnecting with old friends from 20 years ago... the podcast host company (whooshka) I am going with is Australian and came from a referral in Sydney at Cockatoo Island Drydock & Marine (in the harbor there) who I used to rep for in the 1980's. which led to another podcast tecchi in Melbourne, which has some sponsors wanting in as well. 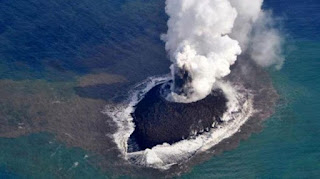 Looking for old friends, I learned that down in the Lesser Antilles, rising almost a mile up from the ocean floor but still roughly 600 feet below the surface,  between St. Vincent and Grenada is a volcano named Kick 'm Jenny who last erupted in 1965. Thinking there is a an imminent eruption, a five mile "keep out" zone has been placed all around the epicenter. and all boats and ship are advised to stay clear.

Kick ’em Jenny has erupted at least a dozen times since its first recorded eruption in 1939. which caused a 900′ high ash cloud rising surface. Since then eruptions have been much smaller, but still dangerous as they pump large quantities of volcanic gasses into the water above the volcano, reducing the buoyancy of the sea water.
The loss of the schooner Island Queen in 1944 is the only known maritime loss,

'On the 5th August 1944, the wooden schooner Island Queen, with over 60 people on board, disappeared between Grenada and St. Vincent. At the time it was thought that a German or allied submarine had torpedoed the boat. These theories, however, cannot easily explain the total lack of debris after the boat’s disappearance. However, if a boat sinks because of lowered water density everything would sink. Kick ’em Jenny had, in fact, erupted the year before (1943) and it is highly likely that it was still actively degassing in 1944, without any signs at the sea surface of such activity'.

Anyway, steer clear of the area, after this year's hurricane, they really needed this ! I recall that there is like a mini-ring-of-fire in the Antilles, and that almost all of the islands are built like lava mushrooms standing on the ocean floor, or, are volacano tops sticking out of the water.