A two-part post, Thanksgiving day is a Thursday, the 23rd, and the Florence C of C Christmas tree lighting, and Olde Towne lighting contest and ceremony (Santa's coming !) is on a Saturday.the 25th, This year there is also a second, late December Harbor sponsored boat lighting contest too.

Usually the "BIG" boat lighting Contest is the Port of Siuslaw event close to Christmas, this C of C/city-event is new, and being 30 days apart is a severe problem for any decorating --given our severe winds and the gales of November that move through with the heavy rain.  So...fea is located in the open, where we get hammered worse than anyone in port, so, we will put up our November decorations for the city contest on the 25th, and take them down, then re install for the December Harbor contest.

Warmer, less hostile weather places (San Diego, Virgins, Florida) have boat light harbor "cruises" at Christmas-time, here, we have log booms (as barricades) spread across the slips/docks to keep the trees and logs that move down river out ! so it is only an at-the-dock display.

After working diligently outdoors in 40 degree weather (with one nice 65 degree day), and hanging over 4,000 lights, we finally got everything assembled 1/2 hour before the beginning of the 4-7 PM contest schedule (dark came at 5:15 Today).

Including us, there were 6 boats decorated, We never lit ours up in it's entirety (only by segments), and did a complete test . . . only at 0530 the night of the event, to disallow any sort of preview (for competitive reasons), at the very last minute we mounted our 4 x 6 foot illuminated sign, and dropped overboard all of the digital swinging icicles and the under water lights.  who knew ?

The coast guard cutter was lighted up, arrived and parked, and the crowd was pretty large since there was no rain. Our cell phone pictures came out terrible... so, I will repost when the newspaper releases their article later in the week, and gives me a copy of their" .jpg but, take a look.
Mark Brennan from the Siuslaw News is forwarding me the picture used on the front page, which I will post here on arrival.
The Chamber called this a "Boat-Float" event, so we made the sign read "Florence Boat Float", our under water lights, and the animated blue-white alternating up/down swinging in the wind icicles simply stole the show, so we won the 1st place award. 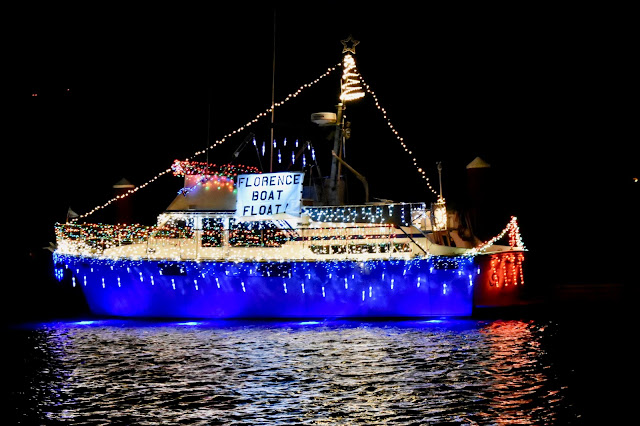 After the evening was over, the next morning at 0430 the gale began with 40 MPH winds, banging the lighted icicles and under water lights against the hull, so, it was way up and on deck to stow everything for the wind storm.... Sunday night we tried to light up for the second time, but had too many smashed bulbs and fixtures to continue, so we will now tear-down (all of it) to redo a different display for the late December port contest.
For this upcoming POS contest in December, we will go mostly high tech, and with very few lights... for a different, and tougher, weather resistant and easier to erect presentation, this year, the two week prep time for the Boat Float Contest made it a a very last minute and hurried setup, so we went conventional.
Be sure to check back on the 23rd of December !