12 NOVEMBER: Saturday night (tonight), was the second night in a row when 10 young men noisely come down the ICM ramp shrieking at 2345, stripped off their clothes and skinny dipped in the 53 degree water off A-dock across from the SW corner of Novelli's (make that LOUDLY skinny dipped) they use the dock power console light to undress, stand around naked awhile, shrieking, then redress,  tonight,  they inspected Novelli's overhead door, padlock and windows with a flash light, continued yelling loudly then dispersed back up the same ramp at exactly 2355 and head West into town afoot.  I turned it in to the Port office as a good test for their new expensive cameras just installed, we'll see.
-----
I almost am embarrassed at having to keep my opinions to myself on this next one, the American scientific and Northwest US population naivete' and worldly ignorance really humiliates me.

For perhaps millions of years, sea creatures that glow have existed, and, they have been known to sailors for thousands of years, especially, well known and documented after 1400 to "world" traveled sailors.

Now, in 2017, Oceanic Researchers, Marine Science Centers, Universities, and the general population in the Pacific Northwest are panic stricken, dumbfounded, and terrorized by the INVASION OF THE SEA PICKLES ! Totally embarassing.  Run away ! they are alive ! they glow and are from Japan's nuclear disaster ! WHAT are they ? OMG ! Mutants !

So, as the brain trust here in the Pacific Northwest oceanic region catches up, here is the story:

Anyone who has been to sea in the past 5,000 years will tell you about luminescent sea pickles, jelly fish, sea worms, sea snails, squid, sea snakes (a type of jelly fish) and those ships wake phyto-plankton, that also cause those brilliant blue glowing waves washing ashore at a beach near you.

To not be aware of these things in this educated 21st Century 2017 is a scary thing. but, like flying fish, here in the Ocean intensive Pacific Northwest these glowing sea things are "new" and go beyond into Oceanic Sci-Fi and the alien unknown that has scientists baffled.

These bumpy, translucent organisms look like sea cucumbers that range in size from six inches to more than two feet long. But they’re actually made up of hundreds of tiny animals knit together with tissue into a filter-feeding cylinder, legally called "pyrosomes", and quite common in warm sea waters, where they can reach a length of (reportedly) 30 feet, and they glow in the dark. Their Greek name pyrosome, translates to “fire body,” which tells you they have been in the Mediterranean sea and viewable for thousands of sea-farers years. . .  they resemble those Cyalume crush and shake liquid tube lights used for flame-less/battery-less camping and emergencies.

Now they’re here, filling the waters off the Oregon Coast all the way up to Sitka,  Alaska, and washing up on our beaches.
One research boat caught 60,000 of them in five minutes, they were so thick in southern Alaska that fishermen gave up trying to fish because their hooks and nets were coming up full of sea pickles instead of Salmon.
Jennifer Fisher, who is a research assistant with Oregon State University’s Hatfield Marine Science Center in Newport, Oregon makes regular research trips to monitor ocean conditions said she started seeing sea pickles in their research net in February, when a GoPro camera on the net revealed an eerie underwater habitat filled with the pickle-shaped creatures. “Basically as far as the eye can see: sea pickles,” she said. “We were dumbfounded.”
No one knows what the effects of this sea pickle invasion will be, but scientists worry that if all the creatures die off all at once they could sink to the seafloor, and suck up all the oxygen as they’re decomposing, creating a dead zone for marine life.
Richard Brodeur, a research biologist with the National Oceanic and Atmospheric Administration (NOAA), is leading an effort to collect live pyrosomes to study in his lab at Newport, Oregon.
“We’re trying to learn as much as we can about these guys,” he said. “I’ve been working for a long time, and I’ve never seen one until now. So, we’re kind of catching up. … It’s really a mystery to us why this is happening.”
He wants to look at how they feed, how they orient themselves vertically in the water, and record their swimming speed. 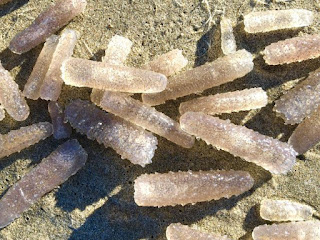 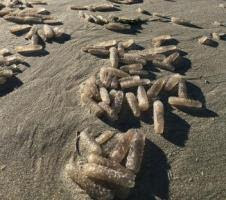